You see them coming toward you. Two people close enough that their shadow is one. Indecipherable from each other. One leans and the other counters. They are older than you but far from old. The shadow moves with a unity that conjures nature. Like trees in a forest. A give, a take, a pull a push. Always in step with each other. Before you are close enough to see, you know right off the bat that you want that. A visceral want that gnaws deep inside a place you didn’t know existed.

You are a solitary figure cutting through the drab grey.. Barely a whisper, a wisp, a sliver in time. One step backwards and you would cease to exist. A retreat into the shadows of time. Solitude. Alone. One.

The power or one or the power of two? The choice has been made. Past decisions have put you here, at the crossroads of time and space. You are one. A solitary creature poised on the edge of the precipice. Looming in front of you, the future. The one thing you cannot control. Dark and dangerous, it is just past your field of vision. If you turn you head fast enough, you can almost catch a glimpse of it out of the corner of your eye. Just a glimpse to know you want to hold it back with all of your might. Keep the darkness at bay. One had reaching forward to the future, the other holding tightly to the past. Willing the decisions you made to change the course of action. But it never happens and you can’t will it differently.

The course has been set. Wheels in motion. A juggernaut. A force that cannot be stopped

They approach. Like trees in the wind. Sway and counter. Stop, go, they meld together. Tearing through the horizon.

The motion is hypnotizing. A vertical rhythm. Look away, but you can’t.

Blue, greens, reds swirl at the event horizon. Colours so vibrant you can hear them. The shimmer of colour so like a tinkling of bells, a pleasant vibration in the ear. An entrance has been made. The contrails of colour swirl behind them as they glide past you. Without a glance toward you and they are gone. The lingering sounds of colour are the only things left in their wake.

As it passes, it leaves you with one thing. Longing of what could be, what is, what is not. I give them names. How? Why? You ask yourself. How did they come to this place and time? Together as one. You want this so badly. You shake with need to be like John and Jane. But you stop and look around. You are alone, moving through the world, insignificant. Nothing more than a sliver of humanity occupying time and space, yet at the same time nothingness.

Once again, the world poised on your lips is why. Why not me? You recount choices. So many choices that have brought you to this point. Point and counterpoint. Nothing more than a pawn. Moved around at the expense of man, woman.

Hands intertwined. A beautiful thing. Like a Celtic knot, intertwined to infinity. The beginning indecipherable from the end. This is what we strive for. That symmetrical beauty. You see it and it brings tears to you eyes, the sheer power of the symbol.

You keep walking forward, past the colour contrails. You walk into the future holding that image in your head, in your heart. The feeling of longing never leaves, never abates. You weigh and measure your choices so you can be more like them, the ones you never forget. You want to feel the power of that everlasting knot, to bend and sway as one. You want to be a part of that. The power of oneness.

Happy Independence weekend everyone.  Not just a long weekend, in which for me is a 4 day weekend, but a time to reflect as well as enjoy. This weekend I am taking to to reflect on myself and my ow…

Sonot Kkaazoot, which is Athabascan for “springtime” and “to slide your feet across the snow” was today, WOOT! 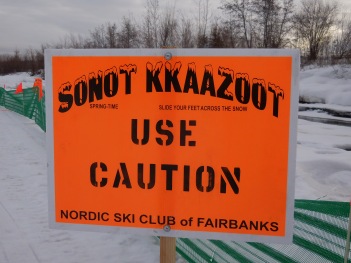 This is our annual ski marathon.  With multiple distances from 20-50 kilometers it really brings a large gathering from the community. From junior nordics to 80 years old  Its an amazing time.  As part of the race committee I was there all day, from start to finish. 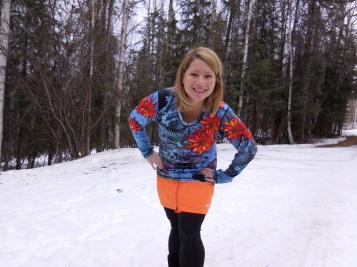 I decided to dress warm for all the standing around, even though the temps were around 40.  I went with the traditional Sonot Official Orange and my INKnBURN Ryu pullover to complete the orange power look.  It was a perfect combo and I was warm all day long. 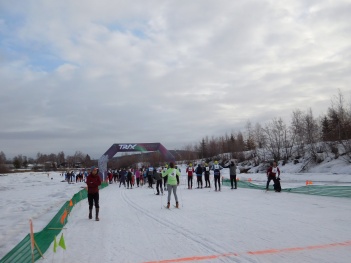 The skiers were off on a very soft course.  And as the signs say, the ice was thin.  I saw two people punch through the thin ice on the Chena River.  Maybe next year we need bigger signs.

The 20K skiers are fast and furious on the return!  Then trickle in the 40K and 50K skiers.  In some spots there were at least 6 inches of overflow water on parts of the course.  We had to re-route around those areas as best we could.  All skiers finished and were accounted for.  My sister Susan was the sweeper this year. She has skied each and every Sonot 50K, she is an animal!  Even our 80 year old participant int he 50k finished strong and with a smile. 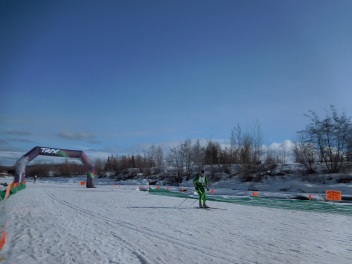 I have some amazing photos of finishers, but in order to preserve privacy of our younger participants I will not post them. Look for updates on the Sonot webpage or the Fairbanks Daily News Miner!

It was an amazing day. I got to see lots of friends and lots of people I only see once or twice a year during ski season.

Until next year!  Now its time for winter break up and spring! 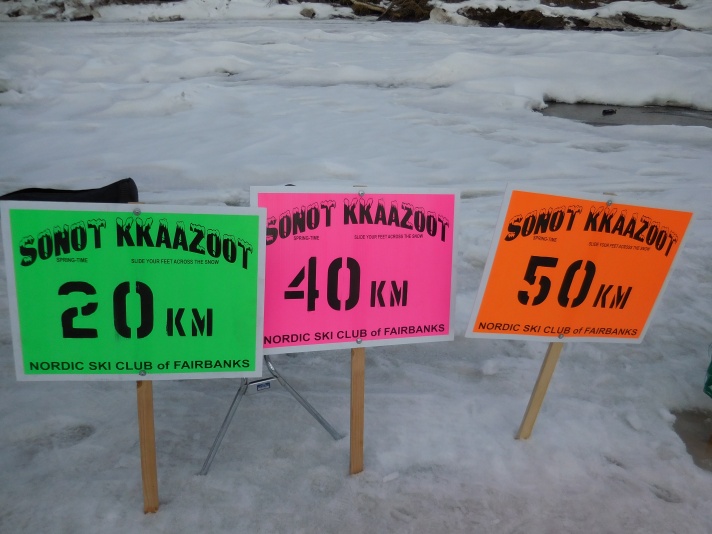 So excited that my new camera should be here today.  Just in time for the Sonot KKaazoot Ski Marathon this weekend.

Finally I can stope using my iPhone, that has a a cracked lens, and take some better quality photos.  This one is still a “point and click” but so much better MP’s and quality.

Prepare to be inundated with photos soon!

My continued quest for fresh bread has led me to this wonderful crusty french loaf.  I have never been able to free form a french loaf.  It always gets to fat and never tall enough.

So, I said enough is enough.  I broke down and bought this very economical french loaf pan from amazon.com.  It was only 14 bucks and it makes two loaves.  This thing was just what I was looking for.  My results were just as pretty and tastey as the local bakery would make. 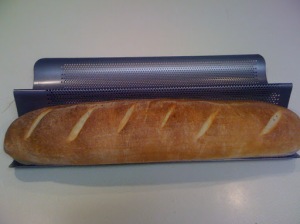 This recipe was only for a single loaf.  But it baked just fine with the other side empty.  I love that this pan in perforated on the bottom.  The bottom crust came out just as cripsy as the top.

Here is the recipe

Proof the yeast with the water and sugar. Let sit about ten minutes till the yeast gets foamy.  Add the oil, salt and 1/2 of the flour.  I do prefer my loaves when I add the oil, but in a traditional french loaf you normally do not add oil.

I mix in my Kitchen Aid with the paddle attachement for about 1 minute, then slowly add in the flour a bit at a time, until I get a wet, shaggy loaf.  I then move it to the board, and encorporate the remaining flour.  Knead about 5 minutes until you get a nice smooth, springy loaf.  Place in a oiled bowl, cover let rise for about 1 hour or until doubled in size.

After 1st rise, punch down and knead 2 or three times.  On floured surface roll out to about 12 x 8.  Roll up on the long side.  Pinch the seam closed.  Place in pan seam side down.  Cover, rise until double, about 40 minutes.  Brush with egg whites mixed with water.  Use a sharp knife to cut slits about 2 inches apart on the top of the dough.

Place in a 425 oven for about 20 minutes.  In order to make a crispier crust you can spritz the bread lightly a few times during cooking with water, or I just place a dish of hot water in the oven with the bread to create the steam needed to crisp.

Remove cool and eat up! 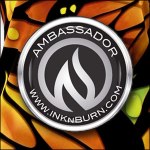